President Al-Zubaidi: Our people made from the break of 7 July a great victory 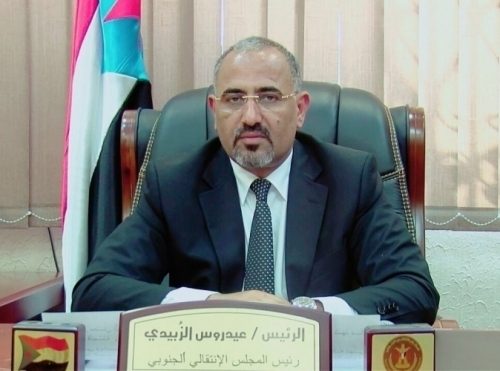 Sayoun district in Hadramout valley witnessed on Sunday a mass rally on the occasion of the Land Day, with participation of thousands of southerners from the different regions of Hadramout.

The President of the Southern Transitional Council, President Aidaroos Qasim Al-Zubaidi, delivered a speech by telephone to the attendants, in which he greeted the crowds gathered in Sayoun, praising the struggle and sacrifices of our southern people to reach the great victories they enjoy today.

President Al-Zubaidi said that July 7, 1994 was a black day in the history of our free people for what they got of killing, robbing, and looting, as there are attempts to reproduce July 7 in a new deceptive form but would not be allowed to succeed.

President Al-Zubaidi stressed that our people have rolled up the period of the barbaric occupation, leaving only a few things that are being worked on, to start a new era with civilized future that guarantees stability and real human development.

President Al-Zubaidi said that our people made by their free national will from the break a victory and peaceful starting for a bright future, and we are starting a new period of empowerment and stability on land, with the support provided by the Arab coalition led by Saudi Arabia and the United Arab Emirates, as we are with them on one path, for one goal and to common destiny for the security and stability of the region and the world.

President Al-Zubaidi stressed that we see today how the gangs project with the name of unity has collapsed and how they have now become fragmented, and our people are steadfast on their land, and those who make problems for them they gave up their capital, land, republic, and state, because they have no national project or goal.

He added that the time of provoking differences between the southerners to fight each other on behalf of the gangs of corruption and looting is over, and the southerner's blood on the southerner is haram and the future will be under the rule of law, justice, and social, political, and civil rights.

President Al-Zubaidi continued that we are establishing now in the south for the future to be a free and independent homeland for all, stressing that any military force from the remnants of the occupation regime has no place and no survival of its members on this free land, and the time of full liberation is so near

President Al-Zubaidi said: "We are aware of the complexity of the Yemeni crisis, whose main parties are evading its solution by fabricating fake exits for themselves southwards.

We are in the position of resistance and progress on all fronts to help them reach a just peace, that guarantees their state stability, and guarantees our state's rights in a secure neighborhood, that its results include the security and stability in the entire region.

At the end of his speech, President Al-Zubaidi paid tribute to the martyrs and the southern resistance and all the people of the south on the whole land from Bab Al-Mandab west to Al-Mahra east.

https://en.stcaden.com/news/8717
You for Information technology