The Presidency of the Southern Transitional Council holds its weekly meeting 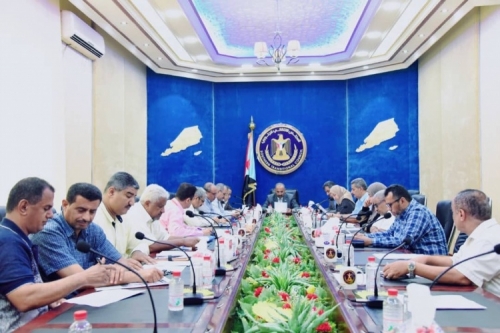 The meeting was devoted to discuss a number of topics, including the establishment of a national media body, and defining its media policy, in which the department of information services, the political department, and the official spokesman are assigned to define the terminology of the political and media discourse of the body to serve its mission.

The meeting stressed on the importance of the role of the body to support the efforts of the Arab Coalition and its role in defending the interests of the nation, and to adopt a media message that is in line with the orientations of the Arab project that is led by the kingdom of Saudi Arabia, and with the active participation of the United Arab Emirates, as the south walks with the Arab Coalition in one line and seeks common goals.

The meeting also reviewed the report of the Relief and Humanitarian Aids Committee of the Transitional Council, and its works accomplished since its establishment until mid-June.

The meeting praised the achievements of the Committee, stressing on the need to take advantage of the experience of the past phase to enhance the positive aspects and overcome the shortcomings.

The meeting listened to the analytical report of the Decision Support Center on the results of the three summits held at the end of the holy month of Ramadan in Mecca of Saudi Arabia and their impact on the political and public situation in the south and its political cause.

The meeting within its agenda also reviewed and discussed the draft political document for the Southern National Line, submitted by the Dialogue Committee in preparation to be presented on the southern components for approval.

The meeting discussed a report on human rights violations committed by the Houthi militias in a number of districts in the province of Dhalea, in addition to discussing a number of other topics.

https://en.stcaden.com/news/8681
You for Information technology