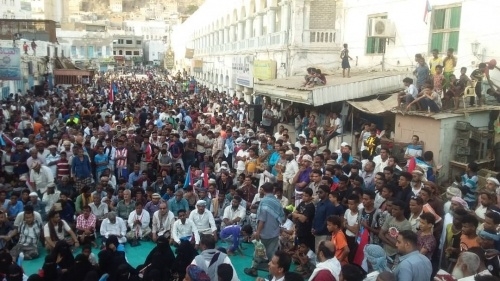 In Hadramout, thousands of its people responded to the call of the Southern Transition Council, rejecting the government of corruption and stopping its futility, and calling on the United Nations not to ignore the southern cause.
The streets of Al-Mukalla, capital of Hadramout governorate got crowded with thousands of people from different areas and cities of the province to demonstrate against the government corruption and to show support to the Southern Transitional Counicl, in participation of the local leadership of the southern transitional council with the demonstrators.
Members of the southern transitional council presidency, the National Assembly, the local leadership in the governorate, the directorates and large numbers of citizens, participated in the protesting march and raised the flags of the Arab coalition countries along with the southern flag.
.
The demonstrators sent a message to the Arab coalition countries, reaffirming their commitment to support the war against the Iranian militias, thanking them for standing by the South and its citizens. They  also renewed their demand for the deployment of the Hadrami elite forces to maintain security in the province.

https://en.stcaden.com/news/8363
You for Information technology