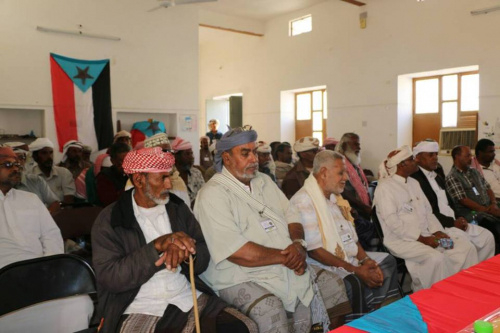 Under the auspices of the President of the Southern Transitional Council (STC)– Major General\ Eidaroos Qaim Al-Zubaidi, and in presence of head of the martyrs department in Hadramout governorate, and leaders of the valley and desert of Hadramout, a meeting was held on Saturday 20\01\2018, for the founding of the local leadership of STC for the district of Al-Soom of Hadramout.

In the meeting, that started with reciting verses of the Holy Quran, then the Southern national anthem, the head of STC in Al-Soom district – Radhi Abdullah Bahamish, welcomed the members of the National Assembly, and the leaders of the valley districts, and the local leaders in the district, launching the work of STC in Al-Soom, pointing that the upcoming tasks will achieve the goal of independence and freedom of the Southern state.

The head of STC Martyrs Department in Hadramout – Ali Saleh Hamdoon, in his speech on behalf of the head of STC in Hadramout Naseeb Alamiry, conveyed the greetings of the President of the Southern Transitional Council (STC) – Major General\ Eidaroos Al-Zubaidi to the citizens of Hadramout, expressing that the steps of launching and forming the local leaders in the district is the result of the efforts and sacrifices of the South citizens, pointing that forming STC is the gathering frame for all the Southern revolution components under the support of the people of the south, stressing that the South now is not as before.

In the meeting, the executive administration formed and the names of the STC members in the district of Al-Soom declared.

https://en.stcaden.com/news/8152
You for Information technology