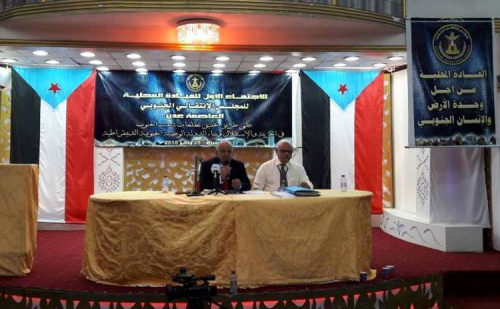 The local leadership of the Southern Transitional Council (STC) held its first meeting in Aden the capital, the meeting devoted to the election of the heads and deputies of the committees, and assigning the specific tasks of each committee.

In the meeting, Dr. Abdul-Nasser Al-Wali – Head of the local leadership of STC in Aden, delivered a speech on behalf of the President of the Southern Transitional Council – Major General\ ِAidaroos Al-Zubaidi, in which he thanked all the citizens of Aden and congratulate them on their patience, steadfastness, and pride, stressing that Aden is full with qualified national cadres in all the fields, as it's now the time for them to contribute in restoring the security, stability, and development to Aden, the capital of the South.

He added: " Our first priority is to enhance the national bonding and to protect the atmosphere of security and stability, and to reactivate the basic services, and to speed up the construction and development in cooperation with the local authority on the level of the governorate, the districts, and with the leadership of the Arab Alliance and the Legitimacy, all are partners in best and worst in this homeland. Our minds and hearts are open for everyone, and we extend our hands to all without exception from Bab Al-Mandab to Al-Mahra, the homeland is for all of us, we strive, we may get right or wrong, we need advice, support, and prayers from our people in Aden".

Dr. Al-Wali continued saying " We will exert all the efforts and do everything we can to help Aden to overcome its recent suffering, we are not replacement of anyone, or against anyone, we are side by side with everyone, Aden needs and gathers all with their diversity without exception, out hands are extended and our hearts and minds are open for everyone. Our main concern is supporting the peace, security, and development of Aden, the capital of our beloved the South". We carry no grudge against Sana'a, and we wish all the best to our people and brothers there, the result of the current miss will be carried by who made the mischief to it and us, there is no good in political situation that is not mature yet, the current reality brought destruction and devastation to the two people in the north and south.".

He continued: "We fought and stood by the legitimacy of his excellency President Abdoh Raboh Mansoor Hadi, but we were very clear since the beginning that we are against the coup and the aggression, and any regime to be imposed by force on the people in the south or north will not be allowed, we did not fight for the re-imposition of the unity by force. The legitimacy of the president Abdoh Raboh Mansoor Hadi is the balance that will help the two countries in the south and north to reach a satisfactory solution in which security and stability will be accomplished for both of them". Dr. Al-Wali called on everyone in the South to open a serious dialogue in which we agree on the best for the South in particular, and for the South and North in general.

Dr. Al-Wali added: " Saudi Arabia, and the United Arab Emirates and all the Alliance countries are our allies and partners in defending the security, dignity and sovereignty of the nation and in the fields of development and construction. This alliance is built on the bonds of brotherhood and neighbors and common interests in which baptized with blood on the ground and we will keep it".

Dr. Al-Wali revealed in his speech on behalf of the President Al-Zubaidi for the national upcoming benefits, stressing on the readiness of the Transitional Council to enhance the national cooperation to represent the South in any national, regional, or international dialogue in order to defend the right of the people in the South to reinstate the full sovereignty independent state within the borders of 1990, after two wars against the people of the South that led to genocide to be committed, and more than a quarter century of failure of the unity that turned to be occupation, humiliation, oppression, pillage, and looting of rights. He expressed the seek for a safe disengagement that we are ready for it. Pointing that the contract between the two people in the South and North failed with the confession of the two parties, and nay new contract should be approved by the two people without any kind of coercion.

At the end of President Al-Zubaidi speech that delivered by Dr. Al-Wali, he said: " The Southern Transitional Council has the mandate of the people to represent them and defend their rights, we will not hesitate or spare any effort for that at any cost, our freedom is our upper limit that nothing will prevent us from it but death"

Following the speech of Major General\ Al-Zubaidi, a discussion was opened regarding the determination of the committees and their tasks. After that, all were invited to elect a head and a deputy for each committee

https://en.stcaden.com/news/8141
You for Information technology