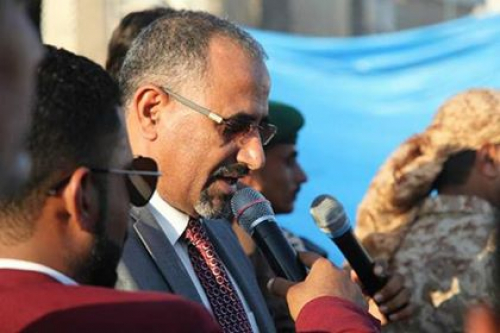 The Southern Transitional Council, today held a public festival to celebrate the Golden Jubilee of the 50th anniversary of the national independence day which coincides on the 30th of November. President of the STC Aidros Al Zubaidi, Hani Ben Berek vice president and members of the presidium were present at the festival .

The celebrations were held at the martyr Khaled Aljunaid Square in Crater –Aden which saw large crowds of people who carried flags of the South and the UAE , chanting celebratory and camaraderie songs in support of the STC and its leader Al Zubaidi as well as singing  the southern national anthem.

At the beginning of the festival Al Zubaidy gave a speech in which he congratulated the people of the south on the occasion here is what it said:

Today we celebrate fifty years of our  independence from the  British colonial rule on November the 30th 1967. On that day the flag of the independent South flew high in the free blue Southern sky which was liberated by martyrs of  freedom.

We are here today after 50 years, all as one, beneath this flag, the flag of freedom and independence, once again to claim our national sovereignty and right of choice for a decent safe and stable life, with prospects for a new Southern  generation characterized with   democratic and human values . We want to start a new second half century which will not  repeat the mistakes of the past, but will establish a new era of an  independent state   which presents the  real value of independence .

We dedicate this celebration to the First tier of martyrs and allow us on your  behalf, to salute the anniversary of our brothers of  the UAE on their  martyr day  celebrations which coincides with our celebrations.It is  also an opportunity to salute the UAE and thank it for its stand beside  us , within the Arab coalition , headed by the KSA in the battle of freedom and against terrorism.

Our national course towards independence is  a continuous well established and a firm one and at the STC we understand the importance of establishing a systematic incorporation in that direction in which  we have exerted  continuous  efforts based on a responsibility upon us .

As result of that we are today announcing the formation of the southern National Assembly and the local leaderships in the governorates, this is a basic step in building the foundation of the institutional work for the future of a sovereign southern independent state, a state with its federal system which establishes the principles of genuine partnership and equality which cannot be achieved unless we guarantee democratic rights and freedoms. This phase of our national cause is a delicate and sensitive one which  requires greater awareness, persistence, and the need   to comprehend the scene objectively based on the essence of the southern issue .

First ,under the rule of the corrupt government  with its  plans and techniques  to degrade the people by neglecting vital and basic services  and the practice of  sending provocative  statements the latest of what happened today in Breka is a conclusive indication that they ‘ the legal government ‘  wants to move the battlefield of confrontation to Aden and the South, which was liberated  by heroes of the South. We will not allow this to happen !

Second, we confirm our firm stand against terrorism and its supporters and we also assure that we will continue our operations against Daesh and Alqaeda in the cities and the villages of the south until we totally cleanse them from those satanic weeds. At the same time we affirm that the weak security situation in Wadi Hadhramaut and the continuous assassinations against the innocent people requires advanced steps in cooperation with the Arab coalition to cleanse the area of terrorism and it multiple forms .

Third , the STC confirms that it is based on firm pillars of the substance of the southern cause and confirms its willingness to negotiate with the international institutions and  the concerned states to present its  vision to reach a political solution , a  vision which leads to a peaceful solution to end war and to present true foundations to the post war stages. In the South we are not advocates of war but we are messengers of peace, love and harmony who want peace stability and development of their land .

Fourth, any political solution  which doesn’t  take into account the requirements of the people of the south  and its right for its own  decision making , will not  achieve any possibility of peace in all Yemen. The southern people’s cause  isn't a margin or part of a file of conflict parties or rivals of  partners in Sana'a, and any solutions  which don’t take the seriousness of the southern issue  into consideration, would be doomed to failure. Therefore the people of the south  will not accept and will not compromise under any circumstances the sacrifices of those who died   to liberate their land and restore their national freedom independent form any Yemeni political system which  serves  parties or partners in Sana'a.

Fifth , the south has its  strategic depth in the region and the battle has proved that the southern example is the title of victory , and that the relationship with the Arab  coalition is a true partnership in achieving victories over the conspirators and terrorism. The south will remain a strategic partner, for the south the battle is not a tactical one but a strategy of existence freedom sovereignty and building a bright developed future .

Sixth , us in the STC realize that what the enemies are aiming to do by creating friction between the people of the south to hit its  national liberation plan. The south  does not accept any compromise or black mail in any shape or form  and as the enemy  has failed in the past 20 years to achieve that friction  it  will continue to fail and crumble in face of the will of the people of the South.

Seventh , the main elements of  our strength are our holding on  the principles of reconciliation and tolerance and to reject the calls of friction between the people of the south therefore  we believe in Promoting  the values of tolerance and acceptance of each other and to  install social peaceful existence .

https://en.stcaden.com/news/8036
You for Information technology