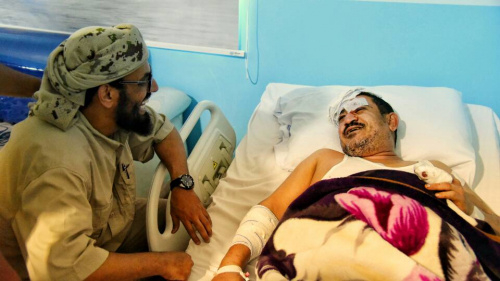 The vice president of the Southern Transitional Council, Sheikh Hani Ben Brik offered his sincere condolences to the family of the martyr Kamal Aldalai who was killed yesterday in a heinous terrorist attack targeting the leader of the resistance coalition Adeeb al-Issi, in the capital Aden.

Sheikh Hani Ben Brik also paid a visit to the hospital where the leader of the resistance Adeeb al-Issi is receiving treatment for the injuries from the cowardly terrorist attack. He conveyed to him the greetings of the president of the Southern Transitional Council Aidroos Qasim al-Zubaidi and his wishes for a speedy recovery to him and to the other injured. He also conveyed to him the condolences of the STC Presidency over the martyrdom of Qasem al-Issi in the attack.

Sheikh Hani Ben Brik attended the consolation of the martyr Kamal Aldalai and conveyed to his family the heartfelt condolence of the president of the Southern Transitional Council Aidroos Qasim al-Zubaidi and his prayers to Allah Almighty to have mercy on the martyr's soul and grant him eternal peace in Paradise and grant his family patience and solace.

Al-Zubaidi in his message expressed his condemnation of all terrorist actions which seek to destroy the country vowing to continue the fight against terrorism wherever it is.


https://en.stcaden.com/news/8033
You for Information technology