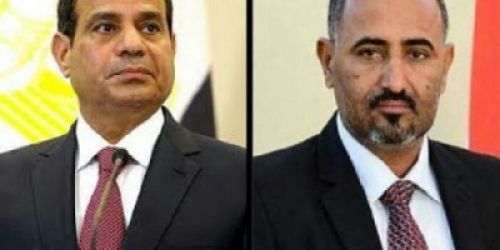 President of the Southern Transitional Council Maj. Gen. Aidros Qasim Al-Zubaidi sent his heartfelt condolences to  Abdulfatah Al Sisi  president of The Egyptian Arab Republic ,leadership, people and families of victims effected by the treacherous terrorist bombing and cowardly attack today on worshippers during their Friday prayers at a mosque in Sinai governorate.

Presidency of the Southern Transitional Council said ,'With  great shock and deep sadness and sorrow we received the heartbreaking news of the terrorist crime  of  the bomb which exploded  amongst worshippers in Alroudha mosque in the  village  East of Bir El Abd  in Al- Arish in Sinai governorate which claimed the lives of 235 victims and injured 109 others’.

The STC confirmed its stand and partnership with the Egyptian people in its fight against terrorism and with all the Arab coalition and the international community in the war against terrorism in all its shapes and forms.
The STC prayed to Allah the Almighty to bless the victims souls with mercy in Paradise and to bestow patience and solace upon their families and wished the injured a speedy recovery and for God almighty to save the people of Egypt and protect them.

https://en.stcaden.com/news/8026
You for Information technology