The Southern Transitional Council: A State Born from the Southern Revolution 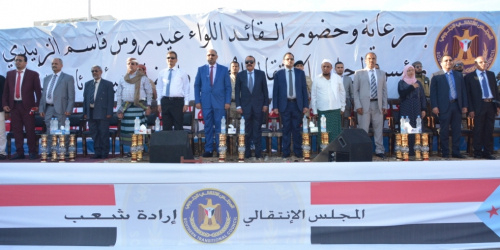 Pointing that the visits which will include Lahj , Dhalae and Abyan will reinforce the presence of the STC on the ground and to represent the southerners in any future negotiations, affirming that the STC aims to achieve self determination of the south.

The visits of the STC members  have received great popular support from all the different sectors of the southern peopel , who positively believe that the steps the STC has taken is to move forward .

Sheikh Saleh Ben Fareed member of the presidium has expressed the STC’s members have been overwhelmed by the rows of supporters who lined the streets to welcome them.

He pointed that all the visits were successful, referring to the direct meeting with southern  public figures , political representatives , tribes leaders and Sheikhs, saying that  they reinforced the efforts exerted by the council to fulfill the peoples goals in building their free southern federal state .

He added that the visits were successful in all the governorates, that was evident in the warm welcome received by the public there, which  sent a message to all, that the STC is on the ground and is present with force because it is the ‘ one’ the people have advocated headed by Aidros Al zubaidi to represent them and is moving steadily towards reclaiming the state .That is what the people have been demanding lately to have a southern leadership on the ground which is expanding and will start working on the institutions’ which will finally lead to the peoples self determination and independence in the near future.

On his part  Maj Gen Ahmad Saeed Bin Berek member of the presidium said that all members of the presidium and the people of Hadhramout in particular and the South in general are pleased for our visits to the southern governorates , Shabwa , Hadhramout and Al Mahara ans we will expand our visits to include Lahj , Dhalea and Abyan . He pointed that the visit was to publicize the National Assemblies and the leaderships of the governorates who will take over the duties of those governorates.

Fadhel Al Gadi member of the presidium who accompanied the council which visited Shabwa, Hadhramout and Al Mahara said that the purpose of holding extended meetings with the council members was  to form local council leaders in the provinces and to inaugurate the STC national assembly’s there .

He added that the Successes of the STC are message to the legal government inside the country that the south is not far from achieving its goal and to reassure the international community that the southern issue is the only solution for peace in the region .

On his part Ali Al Katheeri member of the presidium said that visit serves as a new victory for the STC specially that it came as a conclusion for the inauguration of the national assembly’s in those governorates indicating that the timing was perfect which coincides with completion of the STC’s program.

Member of the Transitional Council head of the public employment service Akil Al Attass said that the visit was a massive shift in the work of the council which indicates that it is in control in the south and not only in Aden therefore no one is capable and is advocated to represent the southerners other than the STC internally and internationally.

Mr Ahmad Ba Mualem member of the presidium said that the results of the visits to Shabwa , Hadhramout and Al Mahara were great and that they sent marvelous, fair and equitable messages to the people of the South , the region and the international community reflecting the needs and aspirations of the people of the south .

https://en.stcaden.com/news/8017
You for Information technology