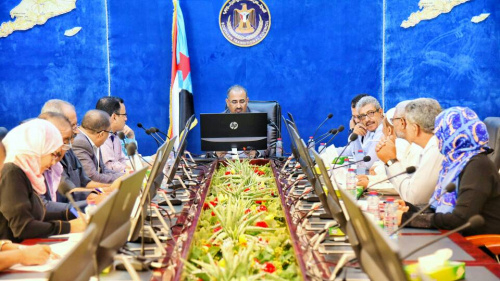 The Southern Transitional Council held a meeting today in Aden under the chairmanship of the president Aidarus Al-Zubaidi in presence of the STC presidency members.

The meeting approved the inauguration of the National Assembly and local STC headquarters in the provinces of Lahj and Al-Dali' in one ceremony to be held on Thursday in al-Houta city , the capital of Lahj, within the framework of the STC efforts to complete the establishment of the Bodies and departments of the Council in the southern governorates.

The meeting also discussed the process of organizing and documenting the personal data of the leadership and cadres of the council and the memorandum presented by the head of the STC Foreign Relations Department, Dr. Aidarus Al-Naqeeb on enhancing the performance of the Southern Transitional Council in Europe and America.

It is worth mentioning that the Southern Transitional Council has recently opened the National Assembly and local STC headquarters in the governorates of Shabwa, Hadhramout and Al-Mahra.

https://en.stcaden.com/news/8016
You for Information technology