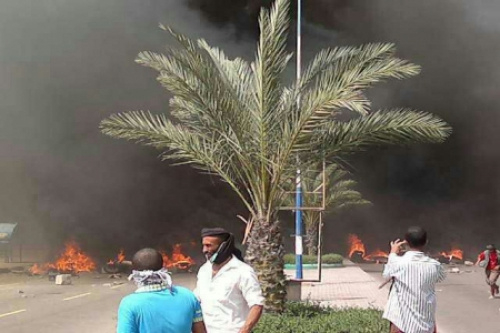 The massacre had been documented and repeated by numerous media outlets and eyewitnesses.

The clashes started between the unarmed demonstrators and the Yemeni security forces which surrounded the square with hundreds of soldiers and dozens of armored vehicles and armored personnel carriers as snipers were deployed on rooftops in order to spreading terror among the protesters by killing some of them to force the other demonstrators to leave.

At 9:00 am, protesters staged a peaceful march from El-Darwish Square to the Parade Square in  Khor Maksar, encountering brutal repression by the yemeni security forces who used live ammunition and smoke grenades, killing three people and injuring seven, they were protesting against the presidential election.
As a result,hundreds of demonstrators took to the main street of Mansoura city and closed it at 11 pm,the event turned into "hit and run" claches with the yemeni army to about 2 pm, then the situation calmed down relatively till 3:30 pm when the young southerners led by the leader Hassan Baum returned in march to Parade Square in the city of Khor Maksar but they were subjected to repeated waves of severe repression similar to the incident of the morning, increasing the number of martyrs to fifteen and wounding more than fifty according to medical and official statistics.

https://en.stcaden.com/news/8006
You for Information technology