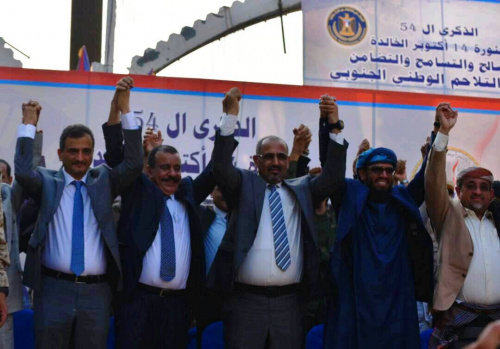 The President of the Southern Transitional Council, Major General Aidros al-Zubaidi delivered today an important speech on the occasion of the 54th anniversary of the glorious October Revolution before the masses who gathered in the capital Aden. At the speech   he announced  seven important points derived from the STC's commitment to its national and moral responsibility which is  an expression of the people's will .

Firstly , the establishment of the National Assembly of the Southern Transitional Council consisting of 303 members from all the southern governorates and from all the social categories . The National Assembly will be the highest legislative authority in the Southern Transitional Council and it's due to start its tasks on the 1st of next November following by the inauguration of its branches in all the southern governorates .

Secondly , a popular escalation against Ben Dagher's government "Which is hosted temporarily in Aden" after its failure to provide adequate public services , its practice of collective punishment ,its attempts to bring back the northern forces ousted by the armed resistance , feeding regional fanaticism and creating political, economical and social disorganization in the South, instead of accomplishing their tasks in liberating the political capital of the legitimacy and fighting the coup plotters and their ousted ally Saleh .
Therefore , we call upon our people to act effectively for the success of the popular escalation program which will be announced within the next few days .

Third , We renew the call to the Arab Coalition countries to stop the systematic destruction program led by the government to undermine the victory achieved by the Southern Resistance and the Arab Coalition in the battlefields . We call , basing on the common interests , for a partnership between the coalition and the Southern Transition Council to manage the liberated southern regions .

Fourth , confirming the Southern Transitional Council Partnership with  the Arab Coalition and the international community in combating and eradicating terrorism. To support  the Elite Forces and the Security Belt to purify the South of the terrorist remnants , affirming the establishment of law and order foundations  . To protect the international interests and securing waterways and to contribute effectively to maintain international peace and security . The Council also supports the Arab Coalition's view on the new US strategy over Iran .
Fifth , Appreciation for the content of the briefing presented to the Security Council by Mr. Ismail Weld Cheikh Ahmed, the UN Envoy to Yemen , in particular the paragraph that urges to present a  radical solution to the southern issue  . The Southern Transition Council welcomes the opening of the UN Envoy Office in Aden affirming its full readiness to assisst him to make his tasks possible and bring success to his efforts to stop the war and accomplish  comprehensive peace.

sixthly , Condemning the dishonest media campaigns against the Arab Coalition countries , especially against the KSA and the UAE launched by qatari media outlets and Yemeni media funded by Qatar and Iran to deform the Coalition's role especially the UAE's role in fighting terrorism . The STC reiterates its condemnation of the actions taken by iranian-backed militias and their ousted ally to destabilize peace and security in the region , and their repeated attacks on the southern regions, particularly Beihan, Mukiras, Karesh and Wadi Hadramout .

https://en.stcaden.com/news/7931
You for Information technology