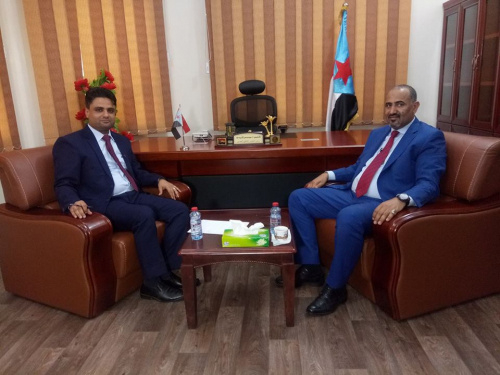 In a television interview with “Al-Ghad Al-Musherk” channel on Friday night , Al-Zubaidy added that ambassadors of super powers expressed their happiness for the formation of the Southern Transitional Council, affirming that the council will soon conduct a public referendum on the unity of Yemen .

The STC president revealed that an important surprise will be announced live streaming on Saturday through Al-Ghad Al-Musherk channel.He also pointed out that the removal decisions taken against him and against other governors were wrong and shouldn't have been taken at all.

The STC president Al-Zubaidy accused Abd Rabo Mansour Hadi's government of failure adding that any southern official in that government could not do anything for the people .

Al-Zubaidy said it loud that there will be no partnership between the Southern Movement 'Hirak' and the government , adding that part of the legitimate government is represented by the "Muslim Brotherhood".

Major General Al-Zubaidi praised the important great role played by the United Arab Emirates that succeeded in building up itself and in making great prosperity for the emirati citizens .

https://en.stcaden.com/news/7928
You for Information technology