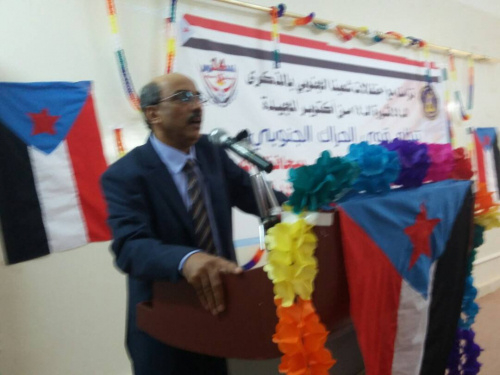 The announcement ceremony of the branch of the Southern Transitional Council in Al-Mahra governorate took place this morning in a revolutionary mass festival to mark the 54th anniversary of the glorious October Revolution in presence of the undersecretary of Al-Mahra Governorate and prominent leader of the Southern Movement (Al-Hirak)Saeed Saadan .

During the festival , Dr. Salim Al-Qumeiri, Chairman of the Southern Transitional Council in Al-Mahra delivered the speech in which he greeted the audience and talked about the anniversary of the glorious October Revolution as the greatest revolution in the Arabian Peninsula that led to the expulsion of the most powerful colonial empire in the world.

Al-Qumeiri reviewed the steps taken to establish the STC branch in aL-Mahra and its importance within the framework of the institutional construction to build the Southern state and to achieve a just and comprehensive solution to the southern cause in a way that satisfies the people of the South .

https://en.stcaden.com/news/7916
You for Information technology