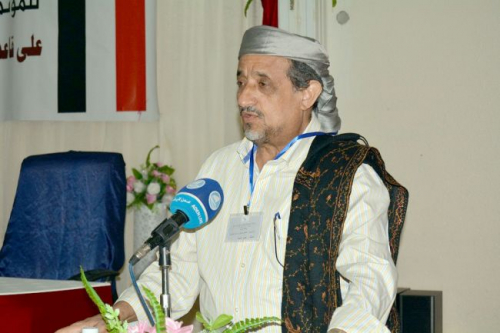 Member of the presidium of the Southern Transitional Council, Sheikh Saleh bin Farid Al-awlaki  said that the results of the external tours  made by the president of the council and a number of its member was successful .

Al-awlaki , in an interview said that there are significant regional and international understanding of the need to establish a Council for the Southern leadership

Q- What are the obstacles that hindered the Council’s meeting in Al Mukalla governorate , is it true that the coalition countries put pressure to freeze Council?

A-Praise to Allah, all the efforts made over the past years and many attempts to  reunite the Southerners efforts  finally culminated in the Southern  Transitional Council led by Aidrous Al-Zubaidi and this is a very big achievement which came at the right time.

Mr Bin Burek was ready to mobilize the masses for this great occasion and we have agreed for the duration of the meeting not to exceed 5 days .Soon after that Mr Burik had to leave because he was called to the KSA where he was delayed there and had to miss the meeting. Despite that all members of the presidium where able to attend the meeting except three members .

The  news which circulating  that is there is  pressure from the brethren in the Gulf to freeze the council is not true , they are just rumors to dampen the mood and spirits of the people of the South .

Q- Media sources are claiming  that  some members of the Transitional Council are detained in the  in the UAE States is it true ?

A- No, it is not true Mr Zubaidi  had  circumstances which enabled him to return and we have poor  means of transportation to and from the abroad  but there is no doubt that the Coalition will stand by us to achieve our goals .

What are the outcomes  of  the external tour  of talks by the president , the deputy president  and council members?

Things are going well, the Southern issue has been pending since 1994 ,problems have surfaced in the last ten years and we all have been hoping over the years that some of these States will  embrace a Southern Conference  but circumstances did not permit time but  all states are now dealing with our case with interest .

A-Yes, there is great understanding, that's what we noticed through our meetings with officials from several countries.

Q-Ben Dager threatened to bring back the  militias to Aden again, what is your comment?

A- Ben Dager is known to all for his shady outlook  towards his official and he is a person who continuously changes loyalty ,one day he  is with the socialist party and the other he with Ali Saleh and today he is a fan of Hadi  despite that we are firm on the ground and we will continue for as long as we can .

Q-What are your plans for the near future? Will you establish a military Council?

A-Members  of the council  are working continuously and are preparing for the future work of the council.   The possibility of establishing a military Council the task of the military personnel and there is no difference between us and them.

Q-The people of the South are preparing for the  anniversary of July 7th  what will your pledge to the masses be ?

A-July  marks  the month of the occupation and at the same time it is  commemorating the victory of the South in July 2017  so  with our faith in  Allah  we all  have  great hope in building  our Southern State.

The Southern state  will not exclude anybody and  it will not be confined to a particular group or tribe .

At the same time we are telling our brothers and people  in the North that we will always be brothers and your businesses and interests in the South will not be touched an advice to you is that  it will be for your benefit to support us .

We will invite the masses  to march and  congregate on the anniversary of the 7th of July, to respond  to the call of duty.

This message is sent out  to  those  in the country and abroad , to the allies and the United Nations.

https://en.stcaden.com/news/7809
You for Information technology