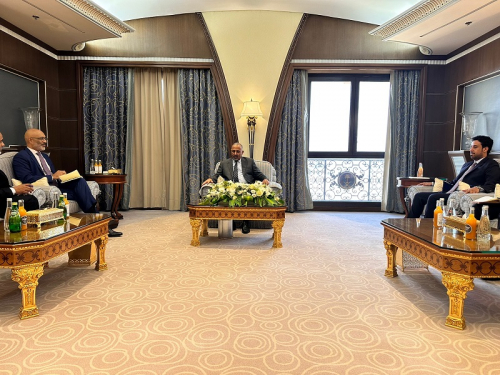 President Aidarous Qassem Al-Zubaidi, the president of the Southern Transitional Council (STC) and the vice chairman of the Presidential Leadership Council (PLC), received on Sunday evening, at his residence in the Saudi capital, Riyadh, Mr. Peter-Derrek Hoff, the ambassador of the Kingdom of the Netherlands to Yemen.

The meeting discussed the latest political developments in our country in light of the endeavours being made at the regional and international levels to end the war and establish a lasting peace in Yemen and the entire region.

Similarly, the meeting reviewed the economic situation in our country, the Houthi attacks on economic facilities, foremost of which are targeting oil exporting ports in Hadramout and Shabwa, and the humanitarian crisis caused by those terrorist attacks that affected paying salaries, the collapsing of the currency exchange rate, and soaring food price inflation.

The meeting touched on the recent developments in the governorates of Abyan and Shabwa, and the victories achieved by the southern armed forces in the military operations "Arrows of the East" and "Arrows of the South," which targeted the hideouts of terrorist organizations in the governorates of Abyan and Shabwa, in addition to the outcomes of the southern national dialogue and the efforts made by the STC to cohesively unite the southern ranks in preparation for the upcoming entitlements.

President Al-Zubaidi valued the aid of the Netherlands' government for our country in the humanitarian aspects, highlighting the need to intensify support in building capacities, qualifying, and training employees of state institutions.

The meeting was attended by Mr. Mohammed Al-Ghaithi, director of the General Directorate for Foreign Affairs (GDFA) of the STC and head of the Consultation and Reconciliation Committee of the PLC, Mr. Imad Mohammed, office director of the Vice-Chairman of the PLC, Mr. Mansour Zaid Haidra, undersecretary of the Ministry of Planning and International Cooperation (PIC) in the power-sharing government, and Mr. Saleh Al-Quaiti, representative of GDFA.

https://en.stcaden.com/news/10813
You for Information technology