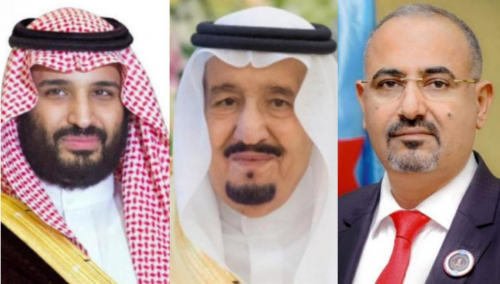 President Aidarous Qassem Al-Zubaidi, the president of the Southern Transitional Council (STC), and Deputy Head of the Presidential Leadership Council (PLC) has heartwarmingly offered a cable of congratulations to the Custodian of the Two Holy Mosques King Salman Ben Abdulaziz Al-Saud and HRH the crown prince Mohammed Ben Salman ben Abdulaziz on the anniversary occasion of the 92nd National Day of the brotherly Kingdom of Saudi Arabia (KSA).

In the congratulating cable, President Al-Zubaidi expressed, on his behalf and on behalf of the people of the South, the warmest congratulations and the sincerest brotherly wishes on this national occasion, praying to Allah the Almighty to return it whilst HH the Custodian of the Two Holy Mosques in the best of health and the brotherly Saudi people further in advancing, progress and prosperity under the wise-led of his highness, King Salman and HRH the crown prince Mohammed Ben Salman Ben Abdulaziz.

In the cable, President Al-Zubaidi highly valued the true brotherly positions of the Kingdom of Saudi Arabia with our people, its constant support to push the wheel of development and construction, maintaining security and stability, and establishing peace in our country, lauding the profundity of the brotherly mutual relations between the KSA and the people of the South, and its incessant keenness on interests of peoples of the entire region, based on its high pioneering position in taking precedence of the Arab-led Project.

To the end of the cable, President Al-Zubaidi reaffirmed the strategic partnership with KSA, affirming that Saudi Arabia has always been and will definitely remain the strategic depth of the South and its permanent supporter, pointing out that the people of the South are looking forward to gaining further support and strengthen fraternal relations to achieve the mutual interests to our brotherly peoples, and Arab and Islamic nations.

The complete congratulating cable as follows:

It is my immense pleasure to offer to your Highness the best of congratulations and blessings, on the occasion of the National Day of the KSA, which is on its ninety-second anniversary that comes in the heyday of the Kingdom due to its grand achievements that have been fulfilled under your wise-led steps in many different fields.

On this great occasion, we  have a wonderful opportunity to express our deep gratitude for the true brotherly and authentic Arab positions with our people, and your constant support to normalize the situation in the South and Yemen, and the brotherly role in defending the Arab project and protecting the national security against the perils of jeopardizing the entire region.

As we congratulate you on this dear occasion, we all reiteratedly affirm that the Kingdom has always been, and will surely remain the strategic depth of our country, and the valve of its security and stability; moreover, we will certainly be loyal to those brotherly blood-ties, sharing the same Arab concern and common destiny, and looking forward to making these strong brotherly relations further flourishing in the upcoming years to achieve the mutual interests of our two brotherly peoples, and the Arab and Islamic nations.

While celebrating with you on this grand occasion, we pray to Allah the Almighty to grant you happiness and good health, and to preserve the KSA; its security, stability, and prosperity.

Kindly accept the topmost congratulations, the highest appreciation, and the utmost respect for your highness.

https://en.stcaden.com/news/10652
You for Information technology