President Al-Zubaidi Gets Briefed on Workflow in Specialized Criminal Courts 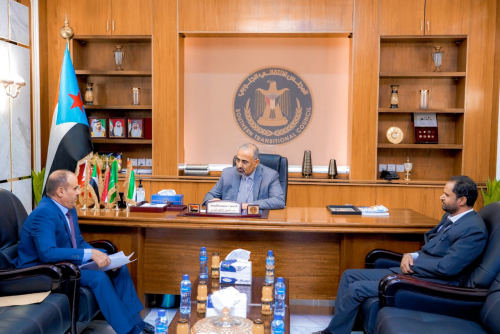 President Aidarous Qassem Al-Zubaidi, the president of the Southern Transitional Council (STC), and deputy head of the Presidential Leadership Council (PLC) in his office in the capital, Aden, on Wednesday, met with Judges Yahya Mohammed Al-Shuaibi, head of the Specialized Criminal Lower Court- Aden, and Aref Ahmed al-Nsi, head of the Criminal Division in the Court of Appeals- Aden.

President Al-Zubaidi listened from Judges Al-Shuaibi and al-Nsi to a satisfied explanation of the workflow in the lower and appeals criminal courts, and the cases that come before the courts, in addition to several issues related to the work of the criminal courts and the judiciary, in general.

At the meeting, President Al-Zubaidi was, too, briefed on the major obstruction to the success of the judiciary, foremost of which is under-adequate protection for courts and judges, and poorly-equiped courtrooms, in addition to ways that can contribute to solving such challenges.

The meeting touched on the level of coordination between the security services and the prosecution, with regard to judicial control and the collection of evidence in all courtcases, foremost of which are drug and terrorism cases; moreover, the tasks and jurisdiction of each authority in accordance with the law, and the mechanisms that ensure the flow and independence of procedures.

President Al-Zubaidi reaffirmed his support and backing for judges to perform their vital role in law enforcement, justice for the oppressed, and deterring criminals, affirming the commitment of the state to providing full protection for judges and facilitating whatever would enable them to perform their national duty in the best conditions.

President Al-Zubaidi stressed the importance of raising the level of coordination between all relevant authorities in the judiciary, starting with the Public Prosecutor, the Supreme Judicial Council, and the security services, to ensure that judicial institutions efficiently, competently and independently perform the assigned role.

https://en.stcaden.com/news/10648
You for Information technology