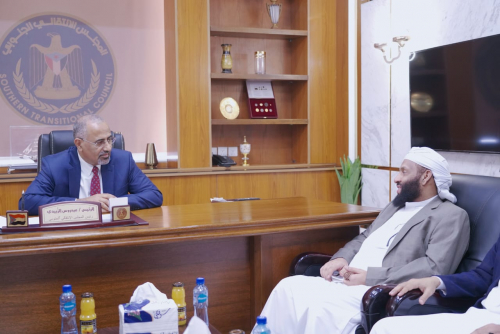 President Aidarous Qassem Al-Zubaidi, the president of the Southern Transitional Council (STC) and Deputy head of the Presidential Leadership Council (PLC), on Tuesday, at his office, in the capital Aden, met with the Minister of Endowments and Guidance in the Power-sharing Government, Sheikh Mohammed Aida Shabiba.

During the meeting, which was attended by the Undersecretary of the Ministry for Affairs of Hajj and Umrah (Pilgrimage), Dr. Mukhtar Al-Rabbash, President Al-Zubaidi was briefed on the progress of work in the ministry, the efforts made by its headship to find a permanent headquarters in the capital, Aden, and the most difficulties  in this aspect.

The meeting touched on several issues related to the work and activity of the ministry, foremost of which is the encroachment and intruding on real estate and endowment lands, and possible ways to restore and protect these estates and lands.

The president lauded the headship of the ministry and its keenness to perform its work from the capital, Aden, affirming the PLC's support and assistance to the ministry to promote the reality of work in the ministry and restore all endowed lands and properties, foremost of which is the obligation of government offices and departments to pay the rent in favor of endowments.

President Al-Zubaidi stressed the importance of upgrading the mechanisms for granting licenses and accreditations to Hajj and Umrah agencies, in accordance with sound legal frameworks, and fair ratios among all governorates.

President Al-Zubaidi, too, emphasized on the ministry to assume its role and responsibility in controlling religious discourse in mosques, and to prevent any inflammatory sermons that contradict the teachings of our true Islamic religion and its straight, moderate approach.

For their part, Minister Shabiba and Undersecretary Al-Rabbash expressed their thanks and appreciation for the support provided by President Al-Zubaidi to the headship of the ministry, and his keenness to overcome all difficulties encountering its work, and to remove all obstacles that hinder performing its activities in the capital, Aden.

https://en.stcaden.com/news/10645
You for Information technology