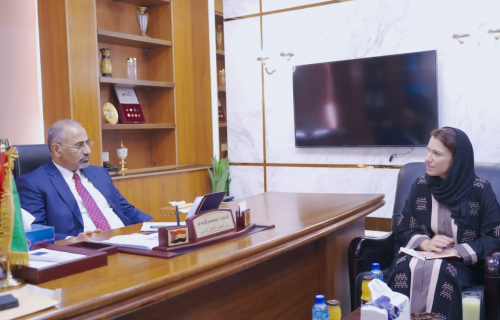 At the beginning of the meeting, which was attended by Dr. Naser Al-Khubaji, member of the Presidency of the STC, Head of the Negotiations Affairs Unit in the STC, Mr. Mahmoud Kayah, Director of Programs of the FES in Yemen, and Ms. Mayada Al-Baydani, Director of Projects in the FES, the president welcomed Dr. Kirchner, expressing his appreciation for the high efforts made by FES to train young people and women to be efficiently empowered in various fields.

On the political aspect, the meeting discussed the latest political and military developments in our country and the Houthis’ continuous breaches of the UN truce. In this regard, President Al-Zubaidi stressed that the future of the truce depends on the commitment of the Houthi militias to unconditionally implement their obligations, foremost of which is the opening of roads, the ceasefire, and the cessation of military mobilization carried out by the militias in several governorates under their control.

Humanitarianly, the meeting reviewed the projects implemented by the FES in our country in the fields of training, qualifying, and building capacity for youth and women, in the political, media, and human rights aspects; peace-building programs in light of conflict, social justice, and training and qualifying programs for cadres of unions.

In this context, President Al-Zubaidi called on the FES to intensify its programs to provide an opportunity for the largest number of young people to build their capacities and increase their inclusion to contribute to development and nation-building in the post-war period.

In turn, Dr. Kirchner expressed her appreciation and gratitude for the efforts made by President Al-Zubaidi to support the organization in implementing its projects in the capital, Aden and the liberated governorates, and his role in overcoming the encountered difficulties, affirming the readiness of the FES to intensify its projects to include a wide segment of youth and women.

https://en.stcaden.com/news/10643
You for Information technology