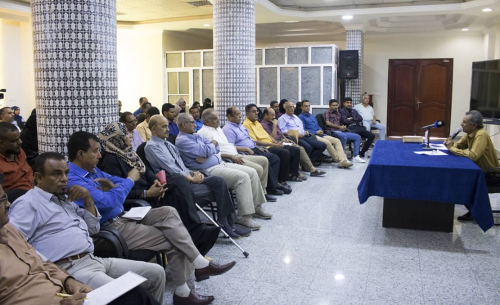 Mr. Fadl Al-Gaadi gave a speech at the beginning of the session in which he welcomed the attendees and expressed his thanks and appreciation to Mr. Najmi Abdul-Majid for offering a suggestion and taking initiative to organize this enlightenment session for the cadres of the General Secretariat, in order to speak on the geographical position of the Arab South, its direct connection with the overseas shipping lines and the paramount location of the South on Al-Mandeb strait.

Al-Gaadi pointed out in his speech that this enlightenment session reviews the conflicts in the world, the cause for concern over Aden and al-Mandab Strait, and the reality of the present time, affirming the significance of its content to enrich the knowledge and political value on the geography of the South, assuring the continuity of such enlightening sessions, and wishing the attendees to get benefited from given information.

In the session, Mr. Najmi Abdul-Majid delivered a lecture on the maritime lines, islands of the South and its great significance in international conflicts, in addition to comparing the past and present situations, reviewing the historical and political background of the South, including Aden and the islands, and the paramount important geographical location on al-Mandab Strait, as well as a center of rapacious political conflicts, explaining the importance of absorbing those historical stages, and momentous events to be projected onto the current situation in dealing with the paramount importance of the South, its maritime lines, and the real significance of location of Aden and islands of the South.

Noteworthy, the enlightenment session involved presenting a number of interventions and remarks that have enriched the topic and added further valuable information.

https://en.stcaden.com/news/10617
You for Information technology