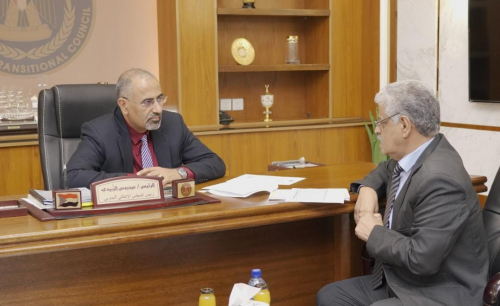 President Aidarous Qassem Al-Zubaidi, the president of the Southern Transitional Council (STC), Deputy head of the Presidential Leadership Council (PLC), on Sunday, met at his office, in the capital Aden, with Mr. Ali Naser Al-Haddar, head of the Public Corporation for Insurance and Pensions.

The president listened from Mr. Al-Haddar to a satisfied explanation on the activities of the Public Corporation for Insurance and Pensions during the year 2021 and the first half of 2022, lauding the efforts made by the Corporation's board to regularly pay retirement pensions and its success in transferring the main center of the corporation from Sana’a to the capital, Aden, since 2016.

President Al-Zubaidi discussed with the director of the Corporation possible ways to raise the minimum wage and submit a proposal to the cabinet for discussion and approval, stressing the importance of making more efforts to improve work mechanisms in the Corporation that serves a large category of retired community who have given the bloom of their life in serving the public service.

In the meeting, the president was briefed on the investments of the Public Corporation in the liberated areas, instructing the local authorities and security services in the governorates to give the assets of the Corporation back and expel the intruders of its buildings.

For his part, Al-Haddar expressed his thanks and appreciation to President Al-Zubaidi for his positions for supporting the headship of the corporation and assisting its efforts to win a victory for the rights of retired persons.

https://en.stcaden.com/news/10605
You for Information technology