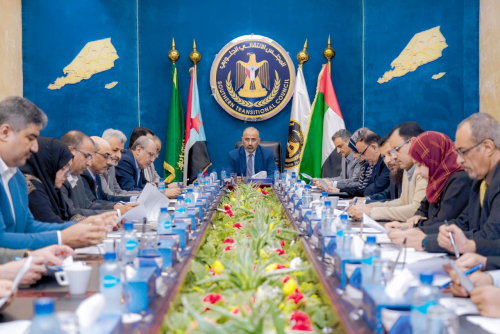 Initially, President Al-Zubaidi welcomed the presence of Dr. Aidarous Mohsen Al Yahari, Head of Political Bureau of the Revolutionary Movement Council (RMC), applauding the ultimate sacrifices of the tops and bottoms of the RMC throughout the stages of the southern liberating revolution, their keenness on the southern cohesiveness, and adherence to the principles, goals and aspirations of the people of the South in liberating the land and restoring the State of the South on its entire national soil with its internationally recognized borders on May 21, 1990.

In the meeting, which was attended by the Minister of State, Governor of the capital, Aden and several ministers of the STC in the power-sharing government, President Al-Zubaidi reiterated the Presidium's welcome and openness to all southern forces, which would consolidate the southern internal frontline, strengthen the southern social fabric, and contribute effectively towards achieving the supreme goal for which the southerners have been sacrificing trains of the wounded, hidden, martyrs, and detainees.

Then the Presidium listened to a brief explanation from Dr. Al Yahri on the progressing activities of the RMC, its emancipatory approach, and efforts to support and strengthen the southern fundamentals, and to protect the gains that have been achieved for the people of the South, in addition to the outcomes of the meetings held by the RMC’s leadership with a number of heads of the STC's bodies in coordinating efforts and joint action to fulfil the southern cohesiveness.

To the end of his speech, Mr. Al-Yahiri thanked the Presidium of the STC, represented by President Aidarous Al-Zubaidi, praising his tireless efforts in the achievements made within the framework of the southern rapprochement and cohesiveness, to preserve the national gains that have been achieved for the people of the South.

The meeting, too, listened to a report submitted by the Decision-Making Support Center on the latest political, military, security and economic developments on the southern landscape, and topics related to the cause of the people of the South, during the past half of August, 2022, included a number of recommendations and suggestions to deal with such developments.

After that, the meeting stood befor the escalating popular movement in Hadhramaut Valley and Al-Mahra governorate demanding to dislodge pro-Muslim Brotherhood forces. In this respect, the Presidium, assured its support to Mr. Ben Madhi, the governor of Hadhramout governorate, to extend the control of the Elite Forces over the entire territory of the governorate and take charge of the security and Military situation to maintain its security and stability, in implementation of the provisions and outcomes of Al-Riyadh Agreement and Consultations.

The meeting touched on the situation in Abyan governorate and the consequences of "Arrows of the East", lauding the positive interaction of the leaders of the joint forces and their role in supporting the southern armed forces participating in the military campaign, and facilitating the tasks in tracking down terrorist elements and destroying their hideouts.

In a separate context, the Presidium was briefed on the outcomes of the meeting of the Secretary-General of the Presidency of the STC, Minister of State, Governor of the capital Aden Mr. Ahmed Hamed Lamlas, with the headship of the Teachers' Union, and the content of the initiative presented by the local authority to resume the education process, in the context, highlighted the need to positively and responsibly deal with this initiative since it is the right possible solution at this period.

To the conclusion of the meeting, the Presidium discussed several topics and issues related to the political and organizational work of the STC, and the level of implementing the assignments approved in the previous meeting, and took the necessary measures in this regard.

https://en.stcaden.com/news/10601
You for Information technology