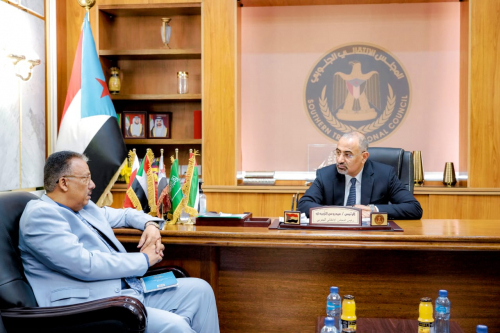 President Aidarous Qassem Al-Zubaidi, the president of the Southern Transitional Council (STC), Deputy head of the Presidential Leadership Council (PLC), on Wednesday, at his office, in the capital Aden, met with Mr. Abdul-Hakeem Qubati, head of the Customs Authority.

President Al-Zubaidi listened from Mr. Qubati to a satisfied explanation on the progress of work at the headship of the customs authority and its offices at air, land and seaports, and the efforts made by Ministry of Finance and Customs Authority to activate customs regulations, laws, and inventorties in all governorates and providing revenues to the Central Bank in Aden.

The president stressed the importance of doubling efforts to rehabilitate the infrastructure of the institutions affiliated with the Customs Authority, upgrading the systems, modernizing techniques of inspection and detection, unifying customs procedures, and provide the institutions and offices of the authority with well-qualified and high-trained competencies, which contribute to raising the efficiency of customs ports and cutting the time of customs clearance, while maintaining safety of citizens and smooth passage of commercial goods.

For his part, Mr. Qubati expressed his thanks and appreciation to the president Al-Zubaidi for his sincere positions and incessant support to the headship of the customs and easing encountered difficulties, affirming the keenness of the Ministry of Finance and Customs Authority on developing and restoring the economic role of the customs as one of the vital revenues of the state.

https://en.stcaden.com/news/10594
You for Information technology