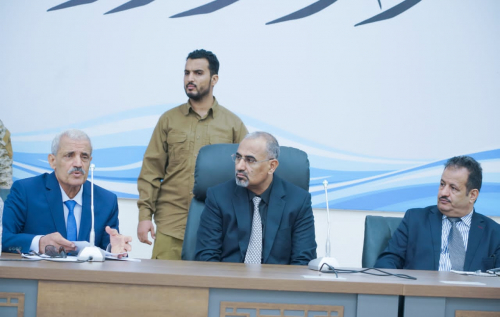 The president Aidarous Qassem Al-Zubaidi, President of the Southern Transitional Council (STC), Supreme Commander of the Southern Armed Forces, Deputy head of the Presidential Leadership Council, on Saturday, in the capital Aden, inaugurated the work of the Supreme Military Committee.

At the beginning of the inauguration, the president Al-Zubaidi praised the immense efforts made by command of the committee in completing and forming dedicated committees and teams, noting that there are high hopes on this supreme committee and its specialized teams, to resolve many contentious issues in the military aspect.

The president emphasized the importance to step up efforts and maintain the state of discipline and commitment in the upcoming period, highlighting the full support of the political leadership to the command of this committee and its dedicated teams to accomplish the assigned national tasks.

Major General Haitham Qassem Taher, head of the Supreme Military Committee, gave a speech in which he thanked the president Al-Zubaidi for inaugurating work of the committee, and unlimited support provided by the Presidential Leadership Council, to the command of the committee to launch its work in a record time.

In the inauguration, which was attended by Brigadier General Hussein Al-Hayal, the committee's rapporteur, Major General Haitham Qassem reviewed the names of members of the committees and teams specialized in the military fields, pointing out that there is a preparatory committee that will undertake responsibility of defining the tasks, programs and plans of the dedicated committees and teams, and will provide the required  information and documents to begin their work on the ground.

Major General Haitham Qassem affirmed that command of the supreme committee recognizes the extraordinary mission ahead, and will work to provide the appropriate atmosphere for all teams and committees, to deal in a positive way and to ensure a perfect completion of its plans, tasks and programs.

https://en.stcaden.com/news/10506
You for Information technology