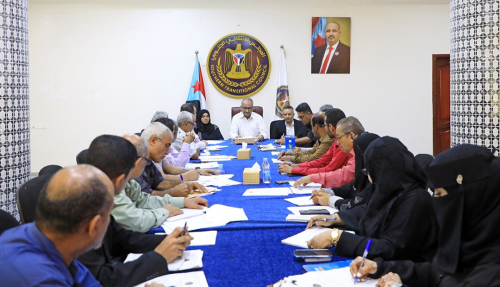 General-secretariat of the Southern Transitional Council (STC) held its periodic meeting, on Wednesday, in the capital, Aden, chaired by Mr. Fadhl Mohammed Al-Gaadi, Deputy of the secretary general, member of Presidency of the STC.

The meeting, which was attended by two members of Presidency of the STC; Dr. Suhair Ali Ahmed and Dr. Mona Bashraheel, and Mr. Mukhtar Al-Yafe'y, deputy head of the National Southern Media Authority (NSMA), Head of Radio and Television Sector, began with a minute of standing to tributedly read Al-Fatiha for the souls of the martyrs who fell in the terrorist act in Al-Dhalea governorate, praying to Allah the Almighty to bestow on them His vast mercy and forgiveness, and to make their abode in the paradise, and wishing a quick healing for the wounded,

The meeting discussed prerequisites to hold the major event of the 5th anniversary of Aden Historic Declaration and also the anniversary of establishing the STC, which is scheduled to be held, tomorrow, on Thursday, in the capital, Aden, and briefed on the program and paragraphs to mark this event, and the needed arrangements for its success.

The meeting also discussed the preparations for paying an inspection visit to families of the martyrs of Counter-Terrorism and Security Belt Forces who thwarted the cowardly terrorist attack that took place in Al-Dhalea governorate last week, and caused a number of casualities; including martyrs and wounded personnel.

The meeting reviewed a report on the political scene in the southern arena, during the past two weeks, of the events and developments concern the South, its people and cause, and to which extent it can be affected.

The meeting reviewed the weekly activity report of departments of the General Secretariat, which included the prominent activities and works performed during the past week.The meeting also reviewed and approved the minutes of the previous meeting.

https://en.stcaden.com/news/10406
You for Information technology