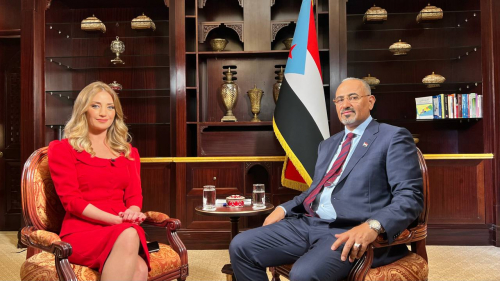 The President of the Southern Transitional Council, President Aidarous Qassem Al-Zubaidi, stressed that the nature of the desired southern state after the end of the war is determined by southerners through a referendum, as the people of the South are the only ones who decide their fate and political future.

President Al-Zubaidi added, during an interview with Al-Hadath and Al-Arabiya TV channels: "The southern project is clear and we have the right to announce it at any time we see it appropriate, and we are now on the covenant to go with the coalition to achieve the goals of the Arab Coalition."

President Al-Zubaidi said that the Transitional Council’s political vision revolves around three options on the table that are put to a referendum on the people of the South, the option to return to before 1990, with its recognized borders, and the option of a federal state, each governing itself, and keeping the unity, and the people of the South determine their choice and decide their fate and political future, as they are first and last decision maker in this matter.

President Al-Zubaidi called on the international community to include the Houthis in the list of terrorist organizations, pointing out that Houthi is Iran's arm in the region, and it has threatened the security and stability of the region, and a serious and firm international stance is required to stop their encroachment and their practices.

President Al-Zubaidi thanked the brothers in the Kingdom of Saudi Arabia and the United Arab Emirates for their firm stances to maintain security and stability and to strengthen efforts to confront the Iranian Houthi tide.

President Al-Zubaidi indicated that the Transitional Council presented a plan for the Arab Coalition to transfer all military forces to the fronts to confront the Houthis, but there are forces within the framework of the legitimacy system that reject and oppose this, explaining that the Muslim Brotherhood thwarts all efforts of the coalition to confront the Houthis, or stabilize the liberated provinces, and at the head of that system is the Vice President.

https://en.stcaden.com/news/10202
You for Information technology