The President of the Southern Transitional Council, President Aidarous Qassem Al-Zubaidi, and his accompanying delegation, discussed in a meeting with the ambassadors of the five permanent members of the Security Council in the Saudi capital, Riyadh, on Monday, ways and mechanisms to address the worsening economic crisis and restructure the system of state institutions and structures, foremost of which are the economic, financial, supervisory and authority institutions, and judicial and political decision institutions.

The issue of the people of the South topped the talks of President Al-Zubaidi with the missions of the five permanent members, in which the President stressed the need for an active presence of the Southern Transitional Council in all stages of the upcoming political process to stop the war and bring peace to the region, stressing the Transitional Council’s support for the efforts of the international community and the envoy of the Secretary-General of the United Nations to Yemen and the US envoy towards stopping the war and designing a comprehensive political process that includes all the active and influential forces on the ground.

President Al-Zubaidi stressed the need to complete the implementation of the Riyadh Agreement and to enable the government of power-sharing to carry out its tasks in providing services, addressing economic and living crises, and combating corruption, reviewing all the efforts made by the Southern Transitional Council towards the full implementation of the provisions of the Riyadh Agreement without selectivity, indicating that the leadership of the Council has come to Riyadh for the third time in confirmation of its keenness to ensure the success of the implementation of the agreement and to unify efforts towards confronting the Houthi militias and terrorist groups, praising the brotherly role played by the Kingdom of Saudi Arabia and the United Arab Emirates.

The President of the Southern Transitional Council, reviewed the efforts of the Council and its forces in combating terrorism and smuggling operations across the coasts of the South, securing international shipping corridors in Bab Al-Mandab, and the Gulf of Aden and the Red Sea, and confronting Houthi militias and Iranian activity aimed at reaching Bab Al-Mandab and Red Sea, hoping to achieve more cooperation, coordination and support for the southern forces from Accept regional and international powers in a manner that enables them to protect national security and maintain international peace and security in this vital geographic location.

In the meeting, President Al-Zubaidi discussed the problem of the growth of terrorist activities, and the increasing number of displaced people coming from conflict areas in the north, and the influx of refugees from the countries of the Horn of Africa, which double the burdens of the host community in the South at a time that it is suffering from a suffocating economic crisis, calling on the five countries and the regional and international communities to strengthen support and strengthen development projects in the South to provide a decent livelihood for citizens.

For their part, the ambassadors of the five permanent members of the Security Council expressed their appreciation and gratitude for the presence of the President of the Southern Transitional Council and his accompanying delegation to Riyadh, stressing that this is an affirmation of the keenness of the Transitional Council leadership to complete the implementation of the Riyadh Agreement.

The ambassadors of the five countries renewed their full support for the efforts to complete the implementation of the Riyadh Agreement and to enhance the role of the government of power-sharing between the South and the north, praising the effective role of the Southern Transitional Council alongside the government, stressing their keenness that the issue of the people of the South gets its rightful place in the consultations of the comprehensive political process. 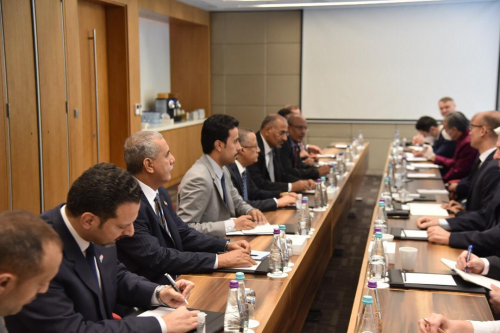 https://en.stcaden.com/news/10098
You for Information technology