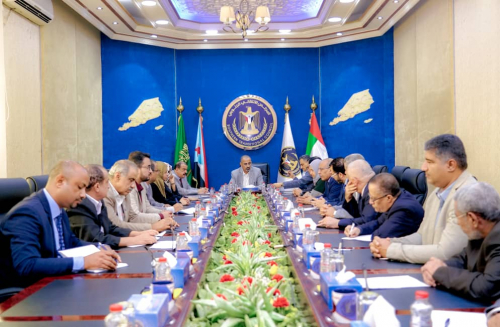 The Presidency of the Southern Transitional Council held an extraordinary meeting on Tuesday, headed by President Aidarous Qassem Al-Zubaidi, the President of the Council, with the participation of the Council's ministers in the government of power-sharing and the governor of the capital, Aden.

The meeting listened to a report from the member of the Presidency of the Council, Major General Salem Al-Socotri, Secretary-General of the General Secretariat of the Presidency of the Transitional Council, Minister of Agriculture and Fisheries, Minister of Agriculture and Fisheries, and the Governor of the capital Aden, Mr. Ahmed Hamed Lamlas, about their meeting with the American envoy, Mr. Tim Lenderking, who visited the capital, Aden, on Monday, November 8, accompanied by the Chargé d'Affairs of the US Ambassador to Yemen, Ms. Cathy Weasley.

The following statement was issued by the extraordinary meeting of the Presidency:

- The Southern Transitional Council welcomes the visit of the US delegation to the capital, Aden, headed by the US envoy to Yemen, Mr. Tim Lenderking, and affirms its support for all efforts aimed at stopping the war and establishing peace.

- The Southern Transitional Council confirms that two years after the signing of the Riyadh Agreement, the second party continues to obstruct it to complete the implementation of the terms of the agreement, and is working to weaken the role of the consensus government, and therefore we hold it responsible for the accelerated deterioration in the economic, service and living conditions in a catastrophic manner that threatens the lives of our citizens and leads to destabilization of security and stability, and the growing activity of terrorist groups, which was evident in the return of assassinations and bombings in the southern governorates.

- The Southern Transitional Council has repeatedly expressed its readiness to complete the implementation of the Riyadh Agreement, but this position was met with more intransigence and rejection from the other side, which was manifested in the deviation of the war’s compass towards the fabrication of side battles by parties within legitimacy, led by the Muslim Brotherhood, which is proceeding to hand over the territories to the Houthi militias, as well as the continuity of the other party in issuing non-consensual unilateral decisions contrary to what is stipulated in the agreement, which has further complicated and aggravated the situation in a way that leads to thwarting all sincere efforts made by us, and by the brothers and friends to complete the implementation of the agreement

In view of all of the above, we in the Southern Transitional Council affirm that our patience has reached its limit and will not last longer unless urgent and chronic measures are taken to complete the implementation of the Riyadh Agreement, foremost among which is the appointment of governors and security directors for the governorates of the South, and the formation of the joint negotiating delegation, and the consensus on a new administration for the Central Bank, and depositing oil and gas revenues, taxes, customs and others in the central bank in the capital, Aden, and restructuring and activating the economic and supervisory bodies (the Supreme Economic Council, the Anti-Corruption Authority, the Central Organization for Control and Accountability), as well as restructuring the Ministries of Defense and Interior and transferring forces to the fronts of confronting the Houthi militias.

https://en.stcaden.com/news/10048
You for Information technology