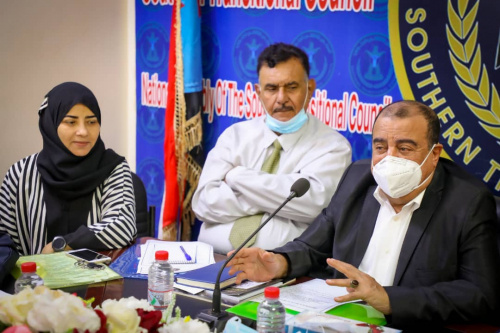 In the meeting, which was attended by the Assembly's Vice-Chairmen of the National Assembly, Major General bin Brik stressed that the South is going through an important and articulated phase today, stressing the importance of continuing to activate the role of committees in the National Assembly as it coincides with this stage.

Major General bin Brik pointed out to the leadership of the Southern Transitional Council seeks to restructure the work of the Council and develop its documents, as well as reorganizing the staff by developing a plan to confront political and field changes.

The Chairman of the National Assembly added, "It is necessary to get the ball rolling, by developing some programs and plans that are appropriate for this stage, since the negative phenomena that have appeared on the surface recently reflected their role on the work of the Southern Transitional Council, so we need concrete action commensurate with the issues of the concerns of the people.”

The Chairman of the National Assembly indicated that the leadership of the Transitional Council is making great efforts to save the capital, Aden, from its disastrous situation, which was made by the government, which is reluctant to perform its work in the governorates in general and the capital, Aden, in particular.

At the conclusion of the meeting, Major General bin Brik praised all the ideas and proposals that had been put forward by the administrative body in the Assembly, provided that they were submitted and discussed with the Presidency of the Southern Transitional Council.