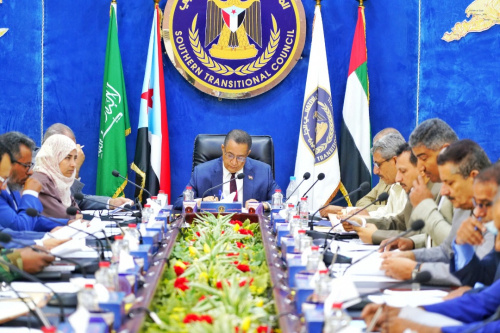 The Presidency of the Southern Transitional Council held its first periodic meeting for this week, headed by Dr. Nasser Al-Khobaji, Acting President of the Council, Head of the Negotiations Affairs Unit.

The meeting discussed the developments in the South, and the continuing process of military mobilization carried out by the Brotherhood and Houthi militias, and the terrorist organizations supported and funded by them on the border areas and fighting fronts.

The meeting warned of the suspicious movements that is trying to target the security of the capital Aden, and to create chaos, as well as the facilities provided by the Brotherhood militias to enable terrorist forces to control sensitive sites and areas along the governorates of Abyan, Shabwa, and Hadramout Valley, to undermine the Southern Transitional Council and the will of the people of the south and their armed forces.

The Presidency stressed the importance of raising the state of high readiness and vigilance, and full coordination with the leadership of the Arab coalition, to confront the plots and criminal acts that the terrorist gangs, extremist organizations and sleeper cells are trying to implement, and take the necessary measures to control the abuses that took place in the capital, Aden and the neighboring governorates.

The Presidency reviewed the services crisis and the difficulties that citizens suffer from in Aden the capital, and the southern governorates, foremost of which is the continued power cuts, the lack of oil derivatives, the failure to address the dues and salaries of the military and civilians, and the exclusion of southern cadres and leaders from the security and military institutions.

The Presidency renewed its call for the parity government to urgently respond to the citizens' demands, with which the Transitional Council stands with them for their fairness and legitimacy, and to provide the requirements, even the minimum, during this stage in a way that guarantees alleviating their suffering before the beginning of the blessed month of Ramadan.

Within the framework of its discussion on the security situation, the Presidency reviewed the security plan submitted by the security authorities in the capital Aden, praising the measures included in the plan to ensure security and stability and arresting violators, stressing the importance of supporting it in the media and socially.

The Presidency also appreciated in its meeting the role of the southern armed forces in establishing the foundations of security and stability, societal efforts and awareness of southerners expelling terrorist groups and rejecting extremism in all its forms.

The Presidency stressed the importance of strengthening the role of southern military and security agencies and units in combating terrorism, and removing any obstacles that obstruct the course of their work, calling in the context of the leadership of the Arab coalition to support these agencies and units, to continue their efforts to eradicate terrorism and dry up its sources.

The Presidency had reviewed the minutes of its previous meeting and approved it, and it also took a number of internal decisions to enhance the authority’s work in coordination with the local bodies in the governorates, and the rest of the relevant authorities.