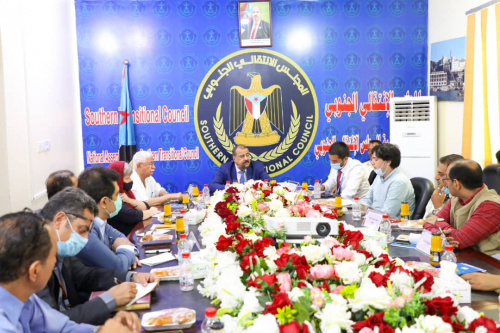 Major General Ahmed Saeed Bin Brik, Acting President of the Southern Transitional Council, Chairman of the National Assembly, praised the role and work of international relief and humanitarian organizations in contributing to alleviating the suffering of citizens in the southern governorates by providing humanitarian and charitable support to the needy, whether they are displaced persons, refugees, or health facilities and services. .

This came during his meeting on Thursday, at the National Assembly’s headquarters, with a number of representatives of international organizations and funds operating in Aden and the liberated regions.

Major General Bin Brik referred to the Riyadh Agreement and the reasons for its failure to be implemented by the other party, and the prominent role of the Southern Transitional Council, the sole carrier of the southern issue in all international and regional forums, and its responsibility throughout the past period at the international and regional levels, in addition to bearing the responsibility of the southern governorates, after that the government turned a blind eye to perform its duty towards the southern people, in addition to the Council's role in combating terrorism, in cooperation and coordination with the Arab Coalition.

The meeting highlighted the rumors and gossip that had recently occurred in the media against organizations operating on the ground under the roof of the United Nations, and in the matter, Major General Bin Brik clarified by saying: “These rumors and gossip will not deter us as Transitional Council from providing support and assistance to them in order to alleviate the suffering of the people and raise their standard of living. "

In the meeting, the Chairman of the National Assembly stressed on the need to consolidate the relationship between the Southern Transitional Council and its specialized committees with international and local organizations in providing relief work to our people without any obstacles and difficulties that hinder the performance of your humanitarian work.

On their part, the representatives of international organizations expressed their thanks to the Acting President of the Southern Transitional Council, for the warm reception and his unlimited cooperation in overcoming difficulties facing the work of each organization, reviewing (each separately) their work tasks and the most prominent activities that they carried out on the ground in order to alleviate the suffering of citizens and improve the difficult situation of health and services in the southern governorates in general, stressing that the continuity of such meetings will positively affect everyone.