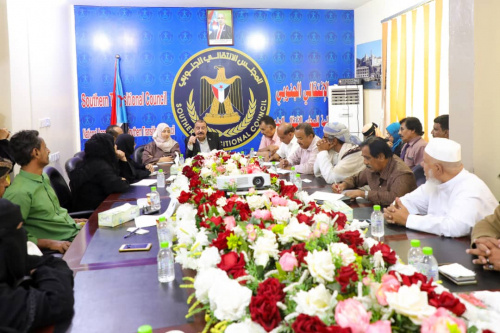 In presence of the two vice-chairmen of the National Assembly, lawyer Niran Sooki; member of the Presidency of the Council, and Dr. Anis Luqman, in the meeting, Major General Bin Brik briefed the members of administrative body on developments in the political and military situation in the south and the summary of the meetings that took place between the Transitional Council negotiating delegation and the Yemeni government in Riyadh.

The Chairman of the Assembly stressed on the commitment of the Southern Transitional Council to the Riyadh agreement and in partnership with the Arab coalition in combating the Houthi and combating terrorism in all its forms, and all non-Arab projects that seek to change the identity of countries in the region and seize their wealth and strategic location.

Major General Bin Brik said: "We will be committed to everything agreed upon by the negotiating delegation in Riyadh led by President Aidaroos Al-Zubaidi, and we are fully prepared to protect our land and our people and protect their aspirations set out in international documents."

Major General Bin Brik added: "We are facing at this stage many military challenges and conspiracies, whether from inside or outside by the greedy states in our south.".

At the conclusion of the meeting, the attendees made a number of inquiries, and they were clarified by the Chairman of the National Assembly.