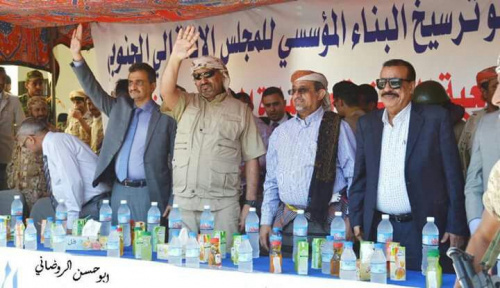 The president of the Southern Transitional Council Maj. Gen. Eidros Qasim Al-Zubaidi, inaugurated on Tuesday 24 October the National Assembly and the Local STC headquarter in Ezzan City, in Shabwa Governorate.

At the ceremony, the people of Shabwa reaffirmed their long-standing support for the Southern Transitional Council till the restoration of the Southern State.

At the opening ceremony, the president of the Southern Transitional Council Maj. Gen. Eidros Al-Zubaidi, delivered a speech in which he presented his greetings to all the free southerners and paid tribute to the martyrs of the peaceful revolution and to the national resistance, renewing the pledge to achieve the great goals of our people, our revolution and our resistance represented by liberating the South, realizing its independence and establishing the federal civil state that meets the aspirations of all the people in the South and promotes stability, development, harmony and well-being for them .

Al-Zubaidi praised the national roles played by Shabwa throughout the years of revolution and resistance against the occupation forces and the oppressive invaders with their defeated terrorist allies .
Al-Zubaidi reminded that Shabwa was a pioneer in promoting the southern reconciliation and tolerance and in launching the giant peaceful movement of Hirak and the southern heroic resistance.

Regarding the ceremony, Maj. Gen. Eidros Al-Zubaidi said that the inauguration of the National Assembly and the Local STC headquarter in in Shabwa is a southern national merit to complete the institution-building of the Southern Transitional Council which became a political  and referential entity fully in charge of many tasks to be accomplished; representing the South and building up its civil, military and security institutions, reaching to emancipating from the occupation bonds and achieving the independence of homeland, state, people and identity.

He also warned the yemeni legitimate Government against the consequences of exhausting the southern people with its corruption affirming that the popular escalation against the corrupted government will set out to put an end to all kinds of disrespect, deprivation, subjugation and all the attempts to reproduce the brutal occupation with totally rejected terms .

Maj. Gen. Eidros Al-Zubaidi highly appreciated the great roles played by Shabwa Elite Forces in establishing peace and fighting terrorism confirming the STC stand by them to reinforce their deployment in all over the regions of Shabwa to cleanse it from the hotbeds of terrorism, adding that liberating the occupied region of Bayhan and the other regions will all always be the priority of the Southern Transition Council  .

He also praised the roles of the Saudi-led Arab Coalition and the outstanding role of the United Arab Emirates in supporting the people and the national resistance of the South .