Ben Berek Calls the Southerners to Unite Behind the STC

Ben Berek Calls the Southerners to Unite Behind the STC 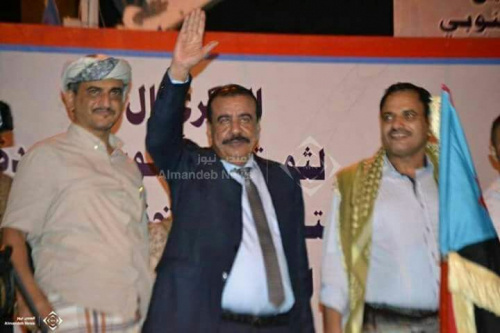 The Southern Transitional Council member of the presidium major general Ahmed Saeed Bin Berek, called on all the people of the south to stand firmly behind the STC in order  to achieve definite victory .

Major Bin Berek delivered a speech to the masses on Friday night in Malla High street ,who are celebrating and participating in the festivities of the 54th anniversary of the 14th of October. In his speech he warned the legitimate government and demanded it to refrain from provoking  the people on a daily bases.

He said.” We have sacrificed our  high government positions for the public interest

.، but we won't allow it to happen again and won’t accept the government to sack any of our leaders from their positions again whether it is in Aden, Hadhramout  or anywhere else because all the people of the south are supporting us.”

Adding that southerners no matter what their differences are they ultimately unite for the sake of their homeland .He said what has been achieved in Hadhramout in returning normality to the daily  life of the people , was achieved with the aid of the KSA and the UAE and not by any effort from  the legitimate government  which is still failing to pay the civilians their wages .

Major General Ahmed Ben Berek affirmed that Hadhramout will always be the lungs which the south will breathe with and it will always demand its rights and demand that peace prevails on  its land.

He noted that as long as there are continuous attacks targeting the Southern Transitional Council, this means that the council is moving in the right direction.