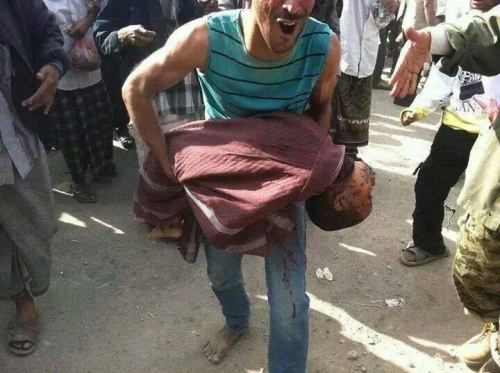 – The Yemeni authorities should make public their findings into an attack on December 27, 2013, on the funeral of a southern separatist activist and prosecute any wrongdoing. The Yemeni military claimed that it was targeting armed militants in the attack in al-Dale`a governorate, which killed 15 people including two boys aged 3 and 11, and wounded at least 23 people.

Following the incident, in which military armored vehicles fired on a funeral service being held in a public school courtyard, President Abdu Rabu Mansour Hadi established a committee to investigate. However, it is not apparent that the government is fully or impartially investigating the incident, Human Rights Watch said. Six witnesses told Human Rights Watch that the government committee, which consists of senior security force officials, had not contacted them. The Sah Organization for Human Rights, which has been supporting the victims of the attack and their families, said that the committee only interviewed al-Dale`a’s governor and the commander of the local military force.

“The government says it is undertaking a major effort as it plans for Yemen’s future to ensure respect for the rule of law, but its actions in al-Dale`a don’t reflect the gravity of the loss of life there,” said Joe Stork, deputy Middle East and North Africa director at Human Rights Watch. “The government has an important opportunity in reviewing the attack in al-Dale`a to show that it won’t sweep such incidents under the carpet.”

The previous and current Yemeni governments have on several occasions responded to serious incidents of violence by establishing special investigation committees. However, these committees typically never publish their findings; nor does their work result in prosecutions.

The investigation into the December 5, 2013 attack by al-Qaeda in the Arabian Peninsula on the Defense Ministry, in the capital, Sanaa, has yet to issue full findings. The attack killed at least 52 people, including foreign medical staff and other civilians. An investigation into the use of lethal force by the security forces against a demonstration that left 13 dead in Sanaa in June has also not been made public.

The funeral service was for Fahmi Muhammad Qasim, 26, of the Southern Movement (or Hirak), an umbrella group seeking independence or greater autonomy for southern Yemen, who had died in a traffic accident. The service was being held in a public school courtyard in the village of Sanah, Hajr District in al-Dale`a governorate. Qasim was from the area, and school courtyards are commonly used in rural Yemen for large gatherings. It was held on a Friday, when schools are closed, and so the students were not there.

Witnesses told Human Rights Watch that about 150 people, including at least 30 children, were present when the funeral began at 1 p.m. in the school courtyard. At around 1:30 p.m., witnesses spotted an armored vehicle mounting a large-caliber gun shoot three rounds of direct fire at the school. The first round hit the ground floor of the school. About five minutes later a second and third round hit the first floor of the school, destroying two classrooms, the witnesses said. Two people nearby told Human Rights Watch that they saw at least four rounds strike houses and other buildings near the school, destroying one of them, which media reports confirmed.

One mourner, Khalil Ahmed al-Hothayfi, 27, told Human Rights Watch that he was standing in the schoolyard when the first round hit. He was wounded by shrapnel in his right hand, right thigh, and left leg, and saw two people next to him die from shrapnel wounds.

Witnesses said that the firing came from the direction of the building housing the governorate administration, about 500 meters from the school. Local residents said the only military installation in the area – the 33rd Armored Brigade – is located in the administration building.

For the next 30 minutes, several military vehicles deployed next to the local commercial center fired automatic weapons toward the school and the neighboring buildings about 200 meters away, witnesses said. Knowledgeable residents identified the weapons as Soviet-designed DShK heavy machine guns, which fire 12.7mm bullets. No deaths were reported from the gunfire.

The shooting hindered efforts to get the wounded to nearby hospitals. A local farmer, Muhammad Saleh Ali, 39, told Human Rights Watch that he had been at home and ran to the school when the shooting subsided to look for his brother and nephew: “I found their bodies next to three other corpses. I found Faris, who was 33 and the father of four children, dead and only part of his head was still there. His son Muntadar, who was 3 years old, was dead too, lying in his father’s arms and the right half of his head was gone.”

The commander of the 33rd Armored Brigade, Brig. Gen. Abdullah Dabaan, told the media on January 2, 2014, that this incident was one of many clashes between the armed forces and militants in al-Dale`a. He said that on December 27, 2013, militants attacked two trucks transporting oil traveling with an escort of four military vehicles. After coming under fire, the vehicles parked at the governorate administration building and exchanged fire with militants who he said were equipped with a B-10 recoilless rifle and a rocket-propelled grenade. He said that the militants were firing from the school and from another building located further east. None of the witnesses interviewed by Human Rights Watch said they saw or heard any militants in the vicinity of the school, nor any shooting at the military vehicles.

The incident took place within the context of escalated violence between government forces and southern movement activists and tribes over the last six months, including at protests and at military and oil installations. There have been monthly clashes between military forces and militants in al-Dale`a, according to local residents and media outlets.

Two doctors working at different local hospitals that received the casualties from the incident said that 14 people died and at least 28 were wounded. Both said that all of the deaths were caused by shrapnel wounds and that all had died immediately. Most of the wounded were taken to Nasr Hospital in al-Dale`a, and the rest to other hospitals in al-Dale`a and Aden. A government representative told Human Rights Watch that the government confirmed the deaths of 21 people, while local organizations and doctors could only confirm 15 dead.

The committee established by President Hadi to investigate the incident is led by Maj. Gen. Saleh Abd al-Habeeb al-Salafi of the Interior Ministry, and consists of members from the Defense Ministry, al-Dale`a governorate’s administration, and military intelligence. The committee has yet to make public any findings, or call for support or compensation to victims or their families.

Independently, on January 9, 2014, the prosecution office in al-Dale`a contacted Nasr Hospital requesting the autopsy records for the 15 dead, according to a doctor who works there. He told Human Rights Watch that the report had not yet been delivered to the prosecutors.

Yemen’s record of failing to produce thorough and impartial inquiries into possible government wrongdoing includes its handling of the December 5, 2013 attack at the Defense Ministry in Sanaa. The ministry’s compound includes a military hospital, and the dead included at least seven foreign doctors and nurses.

The committee established to investigate this attack quickly issued a first report on military casualties, but gave no civilian figures. It stated that 12 armed attackers, “most of whom had Saudi nationality,” were killed in the attack but did not specify whether any suspected attackers had been arrested. The committee has not issued an expected second report.

After the security forces used lethal force against a peaceful demonstration on June 9, 2013, the government issued a statement that a commission with representation from the Defense and Interior Ministries had been formed to investigate the incident. This committee never produced any public findings nor, as far as Human Rights Watch has been able to determine, held any officials accountable for the deaths and injuries.